Some Songs in the Key of Poe 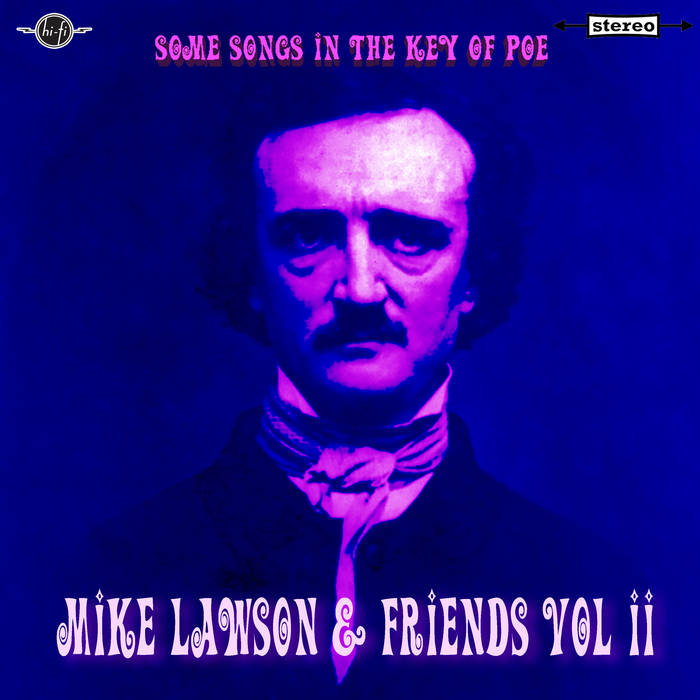 Two decades after the release of Mike Lawson & Friends, Vol I, "Ticket to Fly," finally comes Vol II, “Some Songs in the Key of Poe.” In the first volume, his friends included Jorma Kaukonen, Merl Saunders, Joe Louis Walker, Dennis Robbins, and Bob Welch. It was a furiously fast two-decades for Lawson filled with a series of unfortunate events that delayed his follow-up volumes, including the illness and later death of his mentor, Merl Saunders, and three untimely personalized endings chosen by his close friends and fellow musicians Vince Welnick, Stan Rawls, Bob Welch, followed by divorce.

Poe to music is not a new idea. Several artists have recorded musical versions of Poe’s works, even these very ones, though nothing similar to the compositions and not for these reasons. This was a more personal exploration for Mike. The chosen songs spoke to him in a way that related to his life experiences at the time the music was composed, and he recorded what he heard as he read.

“The Happiest Day…” — this poem speaks of a dreary life view that all is over, lost, that life will never be how it was before. In his dealing with multiple suicides, death, a divorce, one can understand how that could seem relatable. But Lawson heard music ironically upbeat, almost akin to the black gospel tones that emanated from the open windows of the non-airconditioned A.M.E. church he would listen to from the street in the small town where he grew up. Poe’s work “Alone” reflects the emotional emptiness of dealing with loss, grief, while struggling to find life’s beauty in among the darkness. In choosing Eldorado, Lawson heard the rhythm and sounds of the Mexican folk style Huapango in his mind, while relating the idea of a quest to finding the legendary city of gold in South America to the absurd difficulty of starting over dating again in middle age, looking for something precious that might not exist. And finally, the last of “some songs” from the album with Poe’s written words, “The Conqueror Worm…” — if visiting a theater to see a play of hopes and fears that ends with horror doesn’t describe dating again, well… he wrote and recorded them as he heard them.

The idea was never to make a Poe album, just explore where Poe took him, and present those places with new songs, wrapped in the poetry that helped Mike make some sense of all he was dealing with. “Time You Go” evaluates love, when to go, when to stay, down to the 1st Corinthians 13 inspired ending. “Dreaming Only Makes You Blue” explores walking wounded into new relationships. And the last original composition, “Alone Reprise (Happy When She’s Near) contains the thoughts, doubts, wondering, and insecurity of restarting in life.

“This was an album I need to do. I feel like the Howard Finster of folk rock in some ways. I painted here on what I had to work with sonically, in my own time, to convey my thoughts and emotions. I wasn’t trying for fine art for a museum, I just needed to get this out of me. Feels good to do that. Life is good.” – Mike Lawson, 2019